You are here: Home / College News / COVID-19 High and Low Numbers—What’s so significant about these number...

TRIVIA by Dr. Serena C. Gomez—In the past months of the pandemic in the Philippines, news reports are relying on numbers. The numbers of COVID-19 positive determines the local and national government decision on the weight of implementation of enhanced community quarantine. In addition, the numbers of COVID-19 positives are giving the people a sense of responsibility and caution on the populace that they are living with. 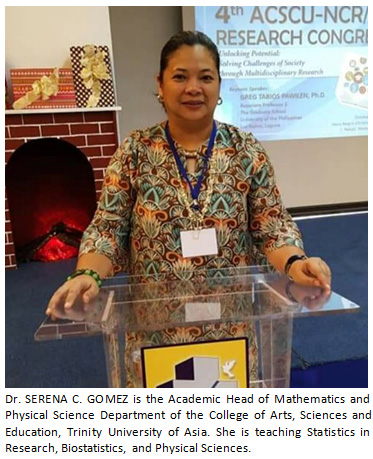 Obviously, people can relate to numbers for them to protect themselves from the pandemic. The zero case you have, the more freedom your locality will enjoy. The increasing number of COVID-19 positive in your locality, the more tightened implementation of laws your local government will facilitate.

In the Mathematics and Physical Science Department, we will take you to the importance of these numbers. The trivia that will lessen our fear and proceed to normal life—hoping these numbers will be flattened soon.

Over 1000 years ago, the ancient Hindu-Arabic numeral system developed a number system based on the numerical digits 1 to 9, which we now called the counting numbers.  This has been natural to us, because they are the first numerical value we learn through counting. As we advance in life, these basic numbers also progresses its meaning to us.

0 Another number that completes the digits is zero. We may think that Zero (0) is associated with nothingness. Therefore, it cannot be your life path number. However, if we share it with the other digits or even place it in the last digit of a number, yields greater significance to its value. Like the multiples of ten which suggest greater importance and energy than one alone.

According to Hurst (2020), having zeroes is not bad. This is reassuring number that you are on the right path, if you’ve been doubting yourself or your abilities, look out for it, there you are heading towards the best version of yourself.

1 One, unit, single or solo. UNITY. It has the power to bring together or harmoniously create mutual understanding.  One as number which represents a stepping stone, beginnings, strength and leadership. Like for instance, amid the novel coronavirus pandemic a unified effort and shared responsibility of individuals is needed. Be ONE with the solution and not add to the problem. Stay home. Practice social distancing and proper hygiene.

2 Two, couple, pair or deuce. The number 2, is the smallest prime number ever created. This number has been used as a technique to solve real-life problems with a promise that “2 is better than 1”. As ranked 2, means a second chance or signifies a relationship becomes better “the second time around”. There are two sides of an argument, Pro’s and Con’s. Two dimensional world, the good and the bad, and many more. This number enable us to see balance and expect harmony.

3 Three, triplet, trio. Tri and Tern or hat-trick… The number 3, is a prime number too, who can be defined as a factor of 1 and itself. Important facts and truths that can be associated with 3. The Philippine Flag has 3 colors; blue, yellow and red. 3 being a Fibonacci number.  TRINITY – 3 persona in 1. Father, Son and the Holy Spirit. This translate a message that we must be a people of love. Because God love us, he gave his only begotten son that through the Holy Spirit we become holy. The Holy Spirit enable Christ to work through us. The number 3 entails good life, love and hope.

4 Four, quartet, foursome, tetra, etc. Facts and things about the number 4 includes the square, telling directions like North, South, East and West. Tetradite which is associated with someone who attaches mystical properties. Tetragram, a word with four letters. Four is also found in nature and astronomy like; there are four phases of the moon, four wings on a bee, and four leaves on a clover, if you are lucky. Four indicate a square or a product of 2X2. This number gives essence to the 4 cardinal virtues recognized by Plato namely: Prudence, the ability to discern the appropriate course of action to be taken in a given situation at the appropriate time. Courage, the ability to confront fear, uncertainty, and intimidation; Temperance; , the practice of self-control translated as sound-mindedness; Justice, as fairness, the most extensive and most important virtue.

5 Five, penta, V, quintuplets. The number 5 is connected with humans’ 5 senses. The Roman numerical V, originate from the image of a hand with fingers spread. If you spread your hands wide means you appreciate the world around you. You are sensitive to the people around you, making you offer a sense of gratitude for what you see, hear, touch, smell and feel.

6 Six, hex, cube. Six is a triangular number. 1 + 2 + 3 = 6.  It is also considered as the first perfect prime number. Why, because it can be express as a factor of prime numbers. The 1, 2 and 3, whether you add them or multiply would still yield 6. Facts about the number 6 includes, a cube with 6 faces. Six being the highest number on a normal die. Six-legged arthropods include insects like flies, moths, ants, beetles and wasps. Volleyball and ice hockey are both played with teams of 6 players. In nature, hexagonal structures are found in many living things such as the cells of a honey comb. The bees find it so efficient in the production of honey. Carbon, which is present in all living matter, has an atomic number of 6.

7 Hept or Sept means seven. A heptagon is a figure with seven sides and a heptachlor is a seven-stringed musical instrument. A septennial is a period of seven years. The Seven Deadly Sins are avarice, envy, gluttony, lust, pride, sloth and wrath (listed in alphabetical order, not in the order of wickedness). Among the many things that comes with 7 are Seven Wonders of the Ancient World, the Seven Sisters (Pleiads), Shakespeare’ Seven Ages of Man, the Seven Levels of Hell and the Seven Dwarfs. Netball and water polo are both played with teams of 7 players. Seven is not really a magic number, but does have an uncanny way of appearing in all sorts of odd situations.

8 The number eight (8) is often times associated with luck and abundance.  That is because stays the same when written upside down.  Another reason why it is lucky is because, it is a perfect symmetrical shape. If you cut the number 8 in half vertically or horizontally, and both halves mirror themselves perfectly. It is also considered as a perfect cube. The symbol 8 in Japan, in Kanji is lucky because it widens at the bottom which symbolizes prosperity.  Many words beginning with “oct”, also means 8. Like the octopus (has 8 arms), octet (a group of 8 musicians) and octagon ( a polygon with 8 sides).

The shape of the number 8 also suggests themes of momentum and repetition due to its cycles and link to infinity. This allows positivity to exponentially grow inside you.

9 In a number of languages “nine” is also a word for “new.” The French word “neuf” has both these meanings. The expression “to the nines” means to the highest degree.  The word ”redivider” is an example of a palindromic word in English Language. Palindromic word has the same sequence of letters backwards or forwards. Facts associated with nine are; nonagon (a polygon with nine sides), cats have nine lives, there are 9 planets in the solar system and Beethoven wrote 9 symphonies. It is easy to know if a number is divisible by 9, this is done by looking into if the sum of the digits is in the table of 9’s.

The number 9 is also associated with compassion and empathy. The expression “to the nines” means to the highest degree. This could be enjoyed by bringing goodness into the lives of others.

TUA SUMMA and MAGNA CUMLAUDES to join in the First Online Philippine Homeschool...

We are All in this Together—Getting through the Educational Paradigm Shift...
Scroll to top