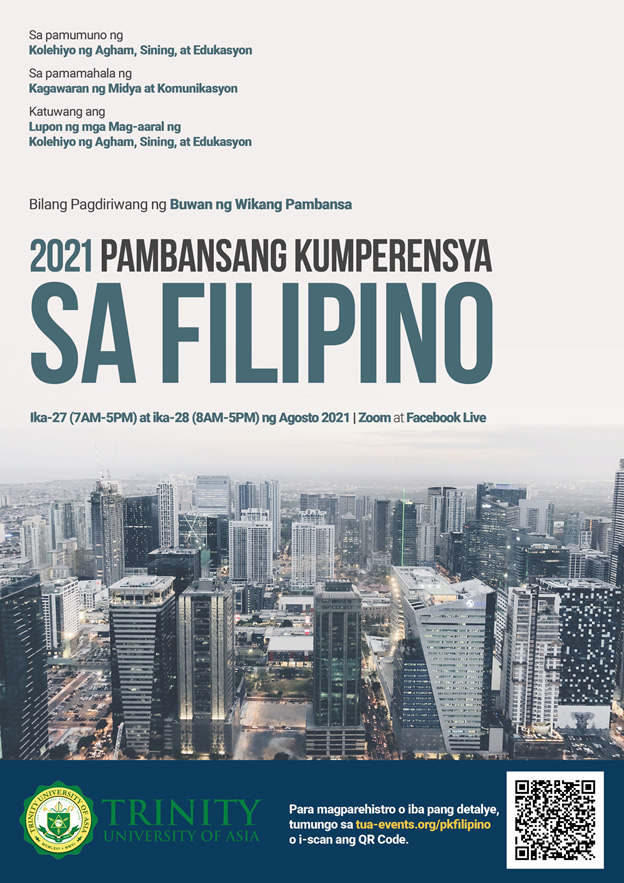 The College of Arts, Sciences and Education (CASE) of Trinity University of Asia in its second year, delivered a two day 2021 Pambansang Kumperensya sa Filipino that supports the month-long celebration of the Filipino Language. This was held on 27 and 28 of August via FaceBook Live and Zoom Live.

The Media and Communication Department together with the CASE Student Council make into culmination the national conference that has the purpose to bring together a sense of nationalism through the theme on “Filipino at Mga Katutubong Wika sa Dekolonisasyon ng Pag-iisip ng mga Pilipino” by the Komsiyon ng Wikang Filipino.

For this year, there were more than 2,000 registered participants from all over the country comprising students, the academe, government organizations, non-government organizations and Filipino language enthusiasts. The two-day conference started at 8:00 in the morning and ended at 5:00 in the afternoon with different relevant topics circled within the theme—decolonization.

Distinguished Professor Patrocinio Villafuerte, former Chair of Filipino Department of Philippine Normal University and a Carlos Palanca Memorial Awards for Literature spoke on “Introspeksiyon sa Kasaysayan ng Wika at Kultura ng Pilipinas at Ebolusyon ng Wikang Filipino mula sa Panahon ng Komonwelt (1935) Hanggang sa Panahon ng Pandemya (2021).”  He reiterated that language is form and will forever be part of the Filipino culture and heritage whatever kind of direct and indirect colonization may influence the country then and now.

Dr. Jose Reuben Alagaran II, Technical Panel for Communication of the Commission on Higher Education (CHED) and the Regional Director of the Philippine Information Agency expounded t he discussions on “Pagpapalaganap ng Kursong Komunikasyon Tungo sa Pagpapahalaga ng Wikang Filipino.” His discussions gave the participants a clear thinking of an organic way of preserving and educating learners on the Filipino language acquisition.

The Officer-in-Charge for Education and Network of the Komisyon sa Wikang Filipino, Mr. Jomar Cañega shared on “Filipino at mga Katutubong Wika sa Dekolonisasyon ng Pag-iisip ng mga Pilipino.” He asserted that colleges and universities may retain Filipino subjects and keep hold of the importance of Filipino language teaching in the collegiate level. Also, he cited some universities that offered series of Filipino language subjects as part of their curriculum. He also shared the initiatives of the government in preserving and holding tight the sense of nationalism among the younger generation.

Researches and Concepts Shared in the Plenary

There were six (6) plenary sessions in the national conference embracing the topics on Wika at Pagtuturo, Panitikan, Literasi, Pamamahayag, Pelikulang Filipino, and Kulturang Filipino.

PLENARY 1: Dr. Arjohn Gime of Manila Science High School and Mrs. Cristina Dimaguila-Macascas of Institute of Teaching and Learning, Philippine Normal University, Manila,  speakers on Wika at Pagtuturo. The speakers tackled updates on the trends of teaching the Filipino language as well as the importance of cultural retention in the new normal during this COVID19 pandemic.

PLENARY 2: Dr. Christine Joy Aguila of Philippine Science High School, Quezon City and Mrs. Chem Pantorilla of Mindanao State University – Iligan Institute of Technology shared the cloud for Panitikan. Both speakers highlighted the importance of literature in teaching. They also gave on the importance of Filipino epics as part of the cultural learning.

PLENARY 3: Dr. Cecille Marie Improgo of Instructional Design and Development, Bukidnon State University and Mr. Jamil Carvajal of University of Santo Tomas, Manila expounded the plenary discussions on Literasi. Their discussions shared on the relevance of choosing comprehensive texts in teaching literature for the students to learn and unlearn the meaning and the purpose of different literature readings as well as signed languages.

PLENARY 4: Dr. Maria Cecilia Ycong of the Media and Communication Department of Trinity University of Asia and Mrs. Ma. Socorro Victorio, a Senior Journalist of People’s Journal explained the pivotal role of Pamamahayag in Filipino language education. Both speakers updated the audience on the digital airing of the media during the pandemic. In addition, they explained why the media use words that are catching and sometimes, puzzling in their banner stories.

PLENARY 6: Mr. Eldrin Jan Cabilin of the Filipino Department of De La Salle University, Manila and Ms. Rhea Peñaflor, Assistant Secretary for Specialized Program of the Department of Social Welfare and Development (DSWD) discussed some salient and important points on Kulturang Filipino. The discussions gave a premium on the Filipino culture of the generation Z and contextualizing the Filipino language in uniting the Filipino people.

The Professional Regulatory Commission (PRC) approved 10 Continuing Professional Development (CPD) points for the conference. There were more than 400 professional teachers signifying their interest in availing the CDP points.

The technical working group of the conference headed by Dr. Al Ryan Gatcho and Dr. Maria Cecelia Ycong is processing the submitted narrative documents submitted by licenced professional teachers for their CPD points.  The completion of PRC 10 CPD points will be closed by Sunday, 5 September 2021.

Appreciation to the Participants

In an opening statement during the first day, Dr. Gisela Luna, Vice-President for Academic Affairs of the University stressed the relevance of language and nationalism. One may speak the comfortable language they wanted, but the sense of being a Filipino remained, the Vice-President stressed. Being bi-lingual can also create a self-pride even if code-switching is being used, she added.

On the other hand, Dr. Howell Ho, the Dean of the College in a closing message humbly thanked the participants and called to continue to fight our damaged culture. He assured that the college and the university will continue to deliver similar activities to provide a platform of shared learning in the new normal.

The two-day national conference on Filipino language can be reviewed via facebook.com/MediatioNMaCWebTalkSeries and the complete details of the event can be read on https://tua-events.org/pkfilipino.