You are here: Home / College News / Death of Reason: The ABS-CBN Shutdown at a Time when the Nation Needs It...

OPINION by Atty. PURAMARYVER F. SAQUING—At 7:52 evening of May 5, 2020, most part of this country had their eyes glued at the sight of ABS-CBN signing off the air. I was literally worried that few hours thereafter, I would not have a reason to wake up at 4am to prepare myself for the daily TV Mass, the only means by which I could be in union with my God in the Holy Celebration. While I was worried for my spiritual nourishment, others may have been thinking about the TV shows of ABS-CBN that have become part of their survival mechanism during a time when the so-big-world has become smaller than the self. 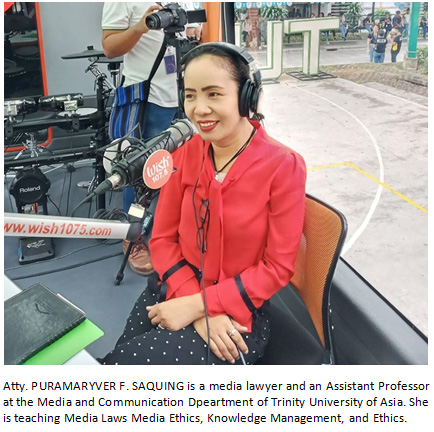 In most abodes where a family of five could barely move in these hot summer days, exacerbated by the imposed-monasticism of almost all Filipinos due to ECQ, TV shows, next to food, are the avenues for survival. This is the real situation for most of us. It takes commiseration to know how that is.

Few hours from now, and every day thereafter, we will be glued to TV news, but this time, there is no need to shift channel because there is no choice at all. It was worse that we only had two giant TV networks to choose from, now it is worst that we are left with no choice at all. Can one choose without choices? No, since part of the essence of a choice is taken from what other alternatives are not. Reducing the number of alternatives is trying to reduce the heights of what the mind can conceive of and what the heart can desire. In the same breath, reducing the number of TV networks to choose from in our daily grind during this tortuous pandemic is reducing our desires and thoughts, both of which are vital to our human existence.

But wait, we have a law to follow, is it not? Without the legislative franchise for ABS-CBN, there is nothing that can proceed from there in the form of a permit, or in legal parlance, a Certificate of Public Convenience (CPC). Something cannot come out of nothing. While that is true, however; one only needs to see the realities on the ground, the events in the recent past and the future trajectory of this country. At a time when there are massive limitations in the movement of our bodies, the movement of our minds and of our desires must not be impeded, at the least.

During crises and calamities, information is as vital as food, for while there is a need to feed the body there is also a need to feed the mind. The latter is the role of TV industries especially to the vulnerable sectors of our society where connectivity is a big hurdle.

The legal position of the National Telecommunications Commission (NTC) is doggedness at best and destructive at worst. In the previous congressional hearings where NTC was a part of, it made an expressed commitment to issue a provisional authority for ABS-CBN to operate owing to the Resolution issued by no less than the Legislative Department. While a legislative resolution is not in itself a law, it serves as a written voice of Congress to give its nod for the renewal of a franchise pending the application of ABS-CBN, which if it were not for the pandemic, would have been granted seamlessly. By issuing the Cease and Desist Order, NTC, in the guise of following the law, which is more of following the threats of Calida, disbanded from its commitment. NTC tried to pacify the fury of many that the law may be harsh but it is still the law, a comfort for the ignoble.

NTC acted like a thief in the night. Just when everybody thought it would make good of its commitment, it went the opposite way. It surprised everyone by reneging on its promise. It served its Cease and Desist Order. It was playing chess with an entity that never considered it an enemy. What a medieval approach to things. It wants to bring the whole Filipino nation to a spectacle where social media is their coliseum and the Filipinos, the gladiators. Some are shouting, “Death to ABS-CBN!” while others are chanting, “Let ABS-CBN live for us to live”. In killing ABS-CBN, who are we killing? Is it the TV network or the right to information?

The right to information is a sacred right of the people. There is a big difference between the freedom of the press and the right to information. The former is mainly the domain practiced by media outfits; the latter is by and for the people. With our current national circumstances and situation, there should be no room for the negation of both, for the supply of information principally comes from the privilege practiced by the media networks, like ABS-CBN in this case. Shutting down a TV network necessarily results to a limited flow of information, a scenario where people are the losers, not the gainers.

This is the time to give hope, not the time to instigate desperation.  Using the provisions of the law to renege on a commitment is a show of low regard to the intellect of the Filipino people. It is an insult to the understanding and sensibility of most of us. During this time of pandemic, Filipinos do not need insults, they need food and information. Both should be provided, not stopped, by the government. As to the law on franchise, one should remember that laws exist for the people, not the other way around. A law is good if it serves the people. If a law is used to threaten instead of inspire, it starts to demoralize people. Using the law to intimidate destroys a nation.

By displacing ABC-CBN, something comes into the picture, for nothing is displaced without being replaced. If ABS-CBN is displaced to accommodate an incoming applicant, then we better be scared of the things to come because that in itself is asphyxiating information and commercializing our constitutionally guaranteed freedoms. Scarcity of information or monetizing our liberty does not serve this country well. Dearth of information is a recipe for under-nourished mind.  Currently, we are experiencing a dearth of food not of our choosing. When we barely have food on the table, let us not aggravate it with cutting the supply of food for our mind. To do that is to kill our reason more than killing our body.

Should we heed the call of reason, or should we join the march for its death?

LACHS-CASE Faculty Member to Speak on the Emerging Landscape of Education amid...

TUA SUMMA and MAGNA CUMLAUDES to join in the First Online Philippine Homeschool...
Scroll to top